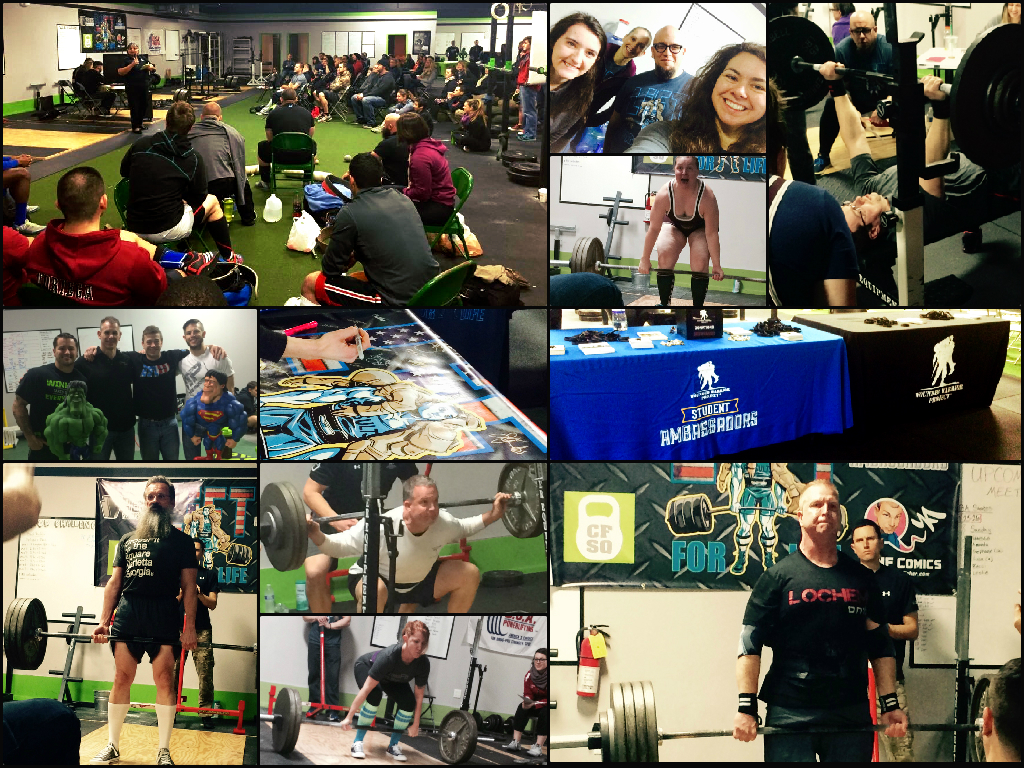 Weekend Recap: Probably the best weekend in our gym’s history…

Saturday kicked off the 2015 Open with 15.1 & 15.1a. The energy was through the roof! We ran 5 heats of competitors over the course of the morning. There were so many PRs and breakthroughs before and during the workout, I couldn’t possibly add them up on two hands. It was pretty amazing to watch and be a part of. Scores for both parts of the workout must be submitted by 8pm tonight. Please don’t make me chase you down. Because I will. I inevitably have to do it every year during the Open. Log into games.crossfit.com and submit your scores. Scores will be validated tomorrow after EVERYONE has submitted. Don’t let your buddy down. Right after the Open wrapped up, the Wounded Warrior Student Ambassadors showed up and started setting up for Sunday’s event along with some CFSQ volunteers.

From the Marietta Daily Journal – Tallouzi stood in the middle of the bustling gym amid the sounds of yelling and the clash of weights hitting against each other as the lifters lined them up on the bars. She was looking at photos of her son on her phone, one in his Army fatigues, another at home posing with family. Tallouzi pointed to her son’s smile and said he was always happy. Tallouzi’s son, Army Sgt. Daniel Tallouzi, died at age 24 in 2009 after suffering a severe brain injury in Iraq in 2006 that left him immobile.

“One of the things so important to me is that we have so many men and women coming home wounded — mentally and physically — from fighting and we need to be taking care of them the best we can,” Tallouzi said.

In the Army and outside, Tallouzi said her son was constantly lifting weights and going to the gym, so the liveliness of the gym Sunday brought back memories of him.

“(Weight lifting) was very much his world,” Tallouzi said, looking around at the competitors preparing to lift. “Dan brought me into his life and gave me a different mission.

After the repeated standing ovation for Mary and the Wounded Warrior Project, Team MVMNT got to work. The team was led by PrettySTRONG coach, Amanda Carroll, who both competed and handled all of our lifters and even ended up guiding most of the other lifters in our flight. Bill Benedict, Amy Buesing, Josh Fernandez, Robert Eugster, Brock Gaston and Jeff Wallis along with Amanda made up our team. Other than Amanda, each of our lifters were competing for the first time and they executed brilliantly. Robert and Amanda both went 9×9 (meaning all nine of their attempts were good lifts). Every single person set at least one personal record if not all three lifts!!

MAJOR kudos are owed!! Ryan Klopfer and Ty Carzoli hosted the event and did an extraordinary job. Thank you to PrettySTRONG Powerlifting, including Becci, Lisa, J, Leslie and Steph for judging the event! THANK YOU THANK YOU THANK YOU to Jessica Westbrook, Forrest Faulk (also judged bench press), Niki Lemley and Jade Stephens for volunteering ALL DAY LONG to keep the gym clean and organized. Many thanks to Amanda! Amanda helped organize the team, gave free private lessons over the last few weeks to prep the new lifters, helped set up the event on Saturday, coached on Sunday, and…well, just put on a hell of a show bringing the crowd to their feet creating love for the sport of powerlifting. Finally, a shout out is due to Dave and Vanessa. Without these two walking through our doors years ago, hosting an event like this would never have crossed our minds. These two coaches have created a TEAM of new coaches and lifters who uphold the standards and it shined throughout the day. We look forward to Lift For Life 2016!!

*Max reps to failure on the thrusters on the final set